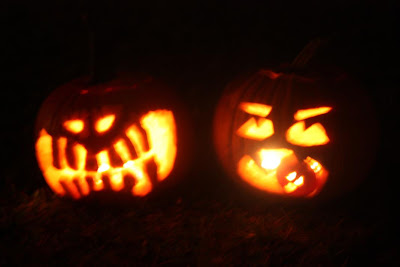 This whole weekend started weeks ago when i received a few emails and text from friends, with events going on this weekend. Chip emailed me and told me about his girl Caroline's tradition of the pumpkin carving contest (party), I said I was game. I then heard Saturday night was gonna be special, The Dielectric, The Speed Kings, Flat Tires and the craziness of downtown Wilm. for Halloween. Oh I'm def. there for that one. Sunday was gonna be a chill day just riding with the crew to Morehead City for a bike show. 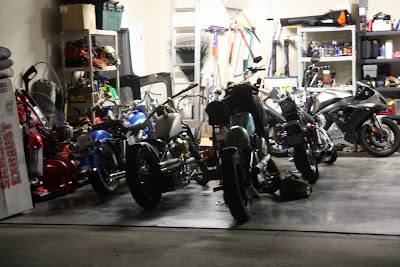 I left work Friday night for Wilmington to attend Chip and Caroline's party. 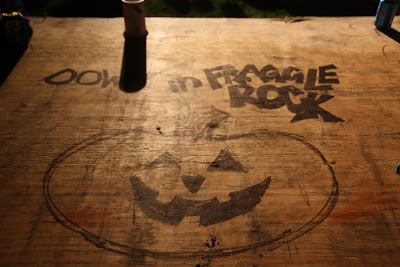 There was tons of food, beer pong, pumpkin carving, and did I mention tons of food and beer. 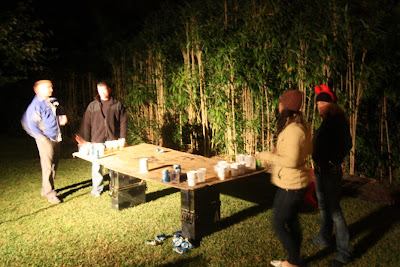 Me and chip did sneak away from the party for a bit to ride the bikes, he rode Aqua Lung and i rode his 69 Shovel around the block and we may have hit a bar sometime too. 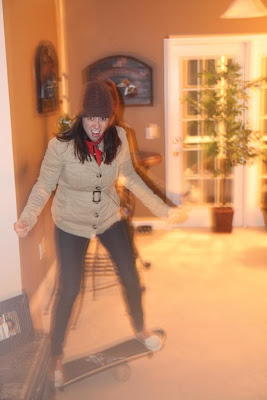 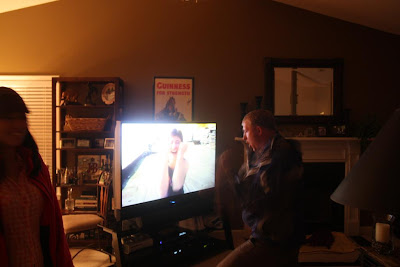 The funniest was seeing the old Journey music video's and the dancing that ensued from it. After everybody left we chilled in the garage with Wes and talked bikes and events we had went too. 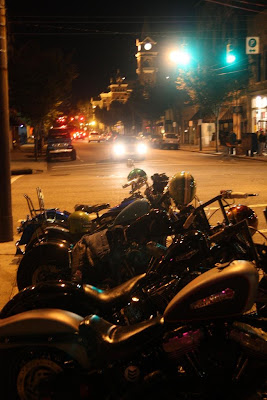 Saturday night was chaotic, but great at the same time. We shot over to Wes's house and did a little pregaming before we left for downtown. When we arrived the old cars and bikes were already waiting for us at 16 taps. We were greeted by tons of people dressed in the craziest costumes. 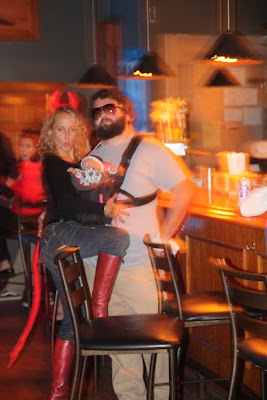 Caroline and Alan from "The Hangover" 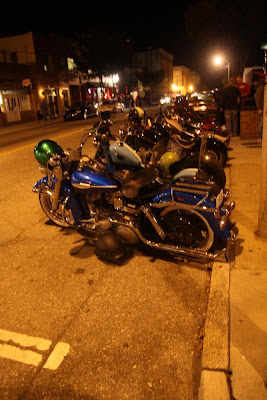 We made our way inside and found the beer, the bands were setting up, The Dielectrics played first. 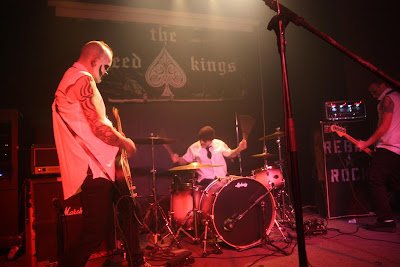 I've posted this band before on this website and you can ask anybody that knows me, that I will tell you I fucking love The Speed Kings. They rocked the house again, even with a fight breaking out in the mosh pit between the car club guys and some college kids mixed with some military guys that didn't know what they walked in too. But they handled it great told them to knock that shit off and they continued to rock the house. 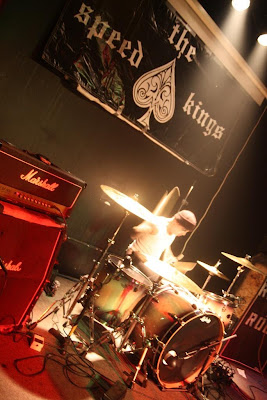 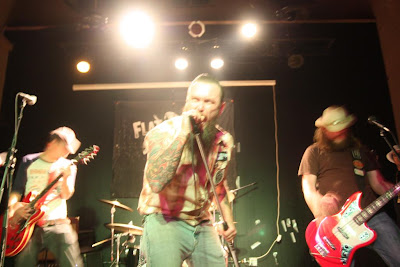 Next up was The Flat Tires, these guys play for the label Rusty Knuckles, they shot their music video earlier that day with the help of the Road Devils car club. These guys are insane and if ever get to see any of Ralph's label's band from Rusty Knuckles, I say do it. 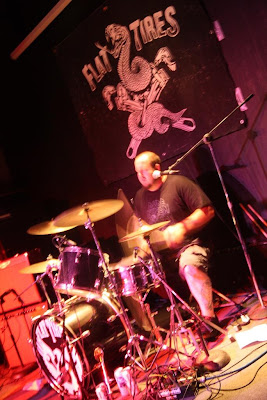 The night ended with me walking to Front St. in Wilm. and seeing the chaotic mess that ensued down there. This broken glass was from a 2nd story window of a bar that yeah somebody was thrown out the window to make that big hole. 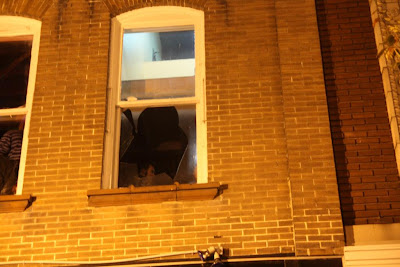 Sunday was a way more relaxed just riding with the guys to Morehead City for a bike show. 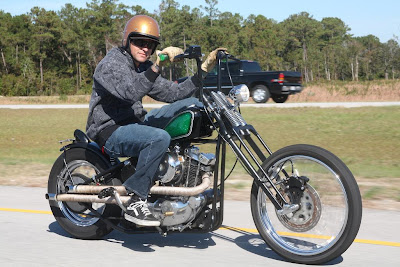 Jason on his Ironhead 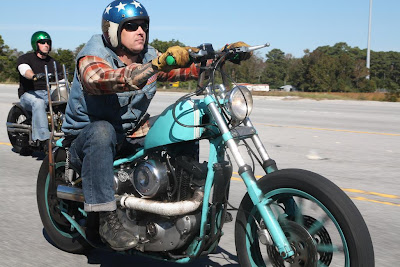 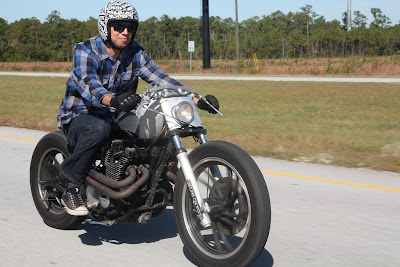 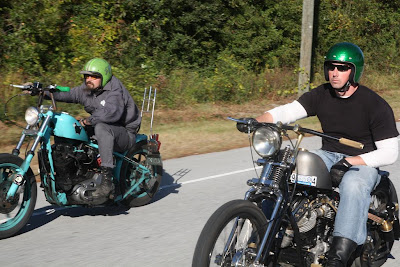 The weekend happened smoothly and comfortable for me because of Chip and Caroline, thanks for putting me up for 2 night in your house. The chocolate on my pillow every night and one on my bike seat in the morning were nice comforts too. Thanks 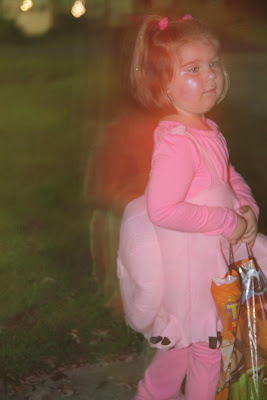 Sunday i managed to make it home and sit on the porch and pass out candy to all the kids out trick-or-treating. 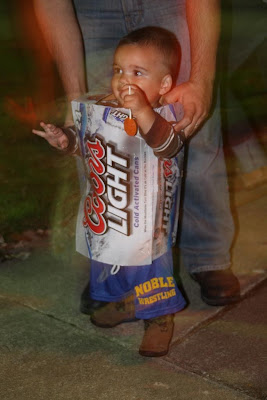 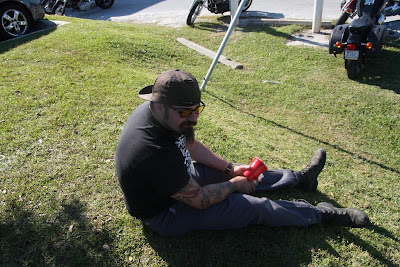 You could basically say I was whooped when i officially called it a night Sunday night. But I wouldn't change any of it, this weekend was blast, and if you spent anytime with me you know you had a blast too.
Posted by Shoprag at 10:11 AM